Hey blogger! After a nice long winter, I thought I'd come out and say hi.

After a long time of sending out CVs, showreels and talking to receptionists I finally got up to another studio a few weeks back now. A lovely (kinda huge) studio who mostly deal with marketing in film, print, mobile, social and most things that are digital. Fingers crossed, they will hopefully have too much work for themselves and so I will be called in.

Moving on, I have started some more little projects.


I came across this image when looking at the 'Portal' project. 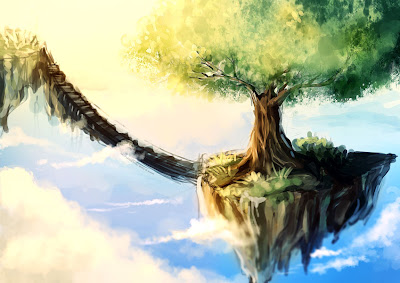 I love the idea of this 'Avatar-ish' floating scape of island. It reminds me of playing games like Guild Wars 2 and Zelda: Skyward Sword and Bioshock: Infinite.

I blocked out a quick scene in maya which I went on to paint over in photoshop to gain an idea of distance and level of detail. 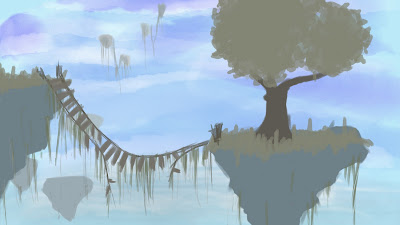 Since then I have been trying to rig a bridge setup  So mostly experimenting with different systems in Maya. I intend to create a scene that floats with the clouds, so the bridge will be shifting its weight between the connecting islands.

I have also started a quick modeling exercise, I had a quick browse on deviantart to get some inspiration  I found this cool looking catfish, it is by an artist who goes by the name fabienmater. 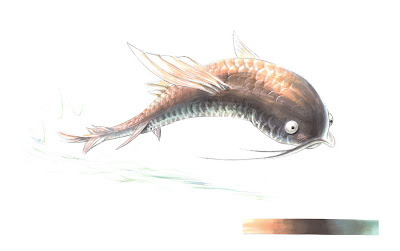 From what I can gather in the images, the fish is huge, 30ft plus! So I thought it would be cool to look at this fish as a veteran of the seas, a true mythological creature. Like I imagine the giant squid, he is intelligent, wise and fierce  He has battle scars proving himself to be something of a lone warrior. Yet he is friendly and majestic looking, he is a alley to the lead character of a story, a legend in his own.

Here is the model I have been working on, it hasn't taken me too long. Just a few evenings after work.

I am looking to get this textured/rigged and perhaps adding in some additional details like scratches and scars.